*More will be uploaded soon*

Incredibly yummy and easy to make… 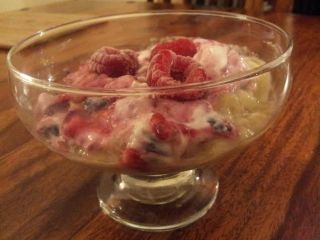 Cut a banana into 4 pieces and place in a bowl, cover and freeze for 2 hours. Pulse the frozen banana pieces in a blender until smooth. Serve with your favourite topping! I used a mixture of berries and Greek yoghurt. 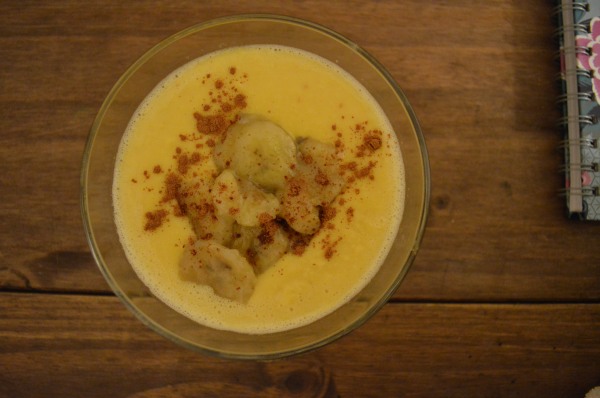 -1 cup milk
-1 cup coconut milk
-1 teaspoon -vanilla essence
-6 egg yolks
-4 tablespoons cornflour
-3-4 tablespoons of set honey (it may work with other types of honey, but I’m not too sure)
-Cinnamon to top (optional)

For the caramelised bananas, melt the butter in a non-stick pan over medium heat. Stir in the brown sugar and cook for about 1 minute (or until it dissolves). Add the sliced bananas, and cook for 3 minutes.

In a saucepan, pour the coconut milk, milk and vanilla over medium heat. Cook while stirring for 5 minutes (but do not allow to boil) and then remove from heat.  Whisk the eggs and cornflour in a heat proof bowl and gradually add the honey. Slowly pour the hot milk mixture over the yellow egg mixture and whisk constantly. Return mixture to the saucepan over a low heat. Cook and stir constantly for 8 minutes (or until the custard thickens) but do not allow to boil. Serve in a pretty bowl and top with the caramelised bananas and a sprinkle of cinnamon. Enjoyyyy! 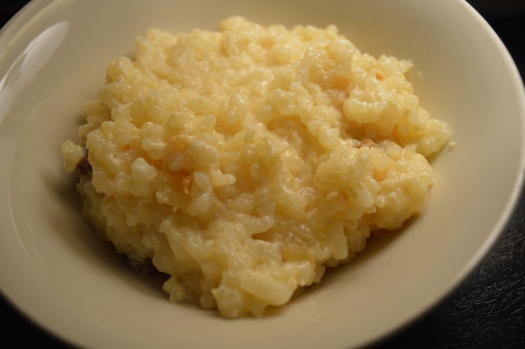 Guaranteed to be the best rice pudding of your life!

– 1 cup pudding rice, washed and soaked in water for 15 minutes

– 5 mastic gum,  grinded in a mortar (this is not arabica gum and can be found in Greek and Middle Eastern stores)

-2 cups of milk (I used Jersey milk, which is a rich, creamy milk from Jersey cows)

– A heat resistant bowl with lid

Pour the milk, cream, water, sugar, butter, salt, and mastic in a heat resistant bowl. Drain the rice and add to the mixture, mixing together with a spoon. Add sultanas to the and drop in the cinnamon stick. Place in oven at around 140-150 degrees for one hour. Remove the lid and mix it lightly with a spoon to ensure that all of the ingredients are mixed. Finally, cover with lid and leave for another hour. Ensure that the rice is cooked before serving. You can eat this hot, or cold! Delicious!

Sift the flour in a large bowl along with the baking powder, bicarbonate of soda and add salt. In another bowl, crack the eggs and add milk, butter, banana, honey, vanilla essence and beat until smooth. Add to the flour mixture along with the blueberries and a hint of cinnamon. Finally, mix together and pour in a buttered loaf pan/tin . Bake for 25-30 minutes, at 180 degrees. Test to see if it’s cooked using a fork. Serve with cream, Greek yoghurt, or custard.

This is a healthy desert as dark chocolate is full of antioxidants, and the spices help your digestive system. It is gorgeous, even if you are not a fan of dark chocolate! It tastes intense, creamy and luxurious…

A grating of nutmeg

Put the chocolate, green tea, and spices in a food processor and blend till it has a bread-crumb like texture. Add the yolk and milk to the food processor bowl and blend. Pour into 3 shot glasses or espresso cups and refrigerate for about 2 hours for the mousse to set. Add raspberries on top for fruitiness?

A serving of Greek Yoghurt mixed with 1 teaspoon of honey and 1 teaspoon of cocoa  powder (I use Green & Blacks Organic), topped with grated milk/white/dark chocolate and berries.

1. Preheat the oven to 180°C/350°F/gas 4. Put the soft butter into a mixing bowl and beat with a wooden spoon, an electric mixer or your hand for a minute until very smooth and creamy.
2. Gradually beat in the sugar, then keep on beating for 3 to 4 minutes or until the mixture turns almost white and becomes very fluffy in texture; scrape down the bowl from time to time. Break the eggs into a small bowl, add the vanilla and beat lightly with a fork just to break them up. Slowly add to the creamed mixture, a tablespoon at a time, giving the mixture a good beating after each addition and frequently scraping down the bowl. This will take about 5 minutes. If the mixture looks as if it is about to curdle add a tablespoon of the sifted flour and then continue adding the last portions of egg.

3. Sift the flour again, this time onto the mixture, and add the milk. Gently but thoroughly fold the flour into the egg mixture using a large metal spoon. Do this as lightly as possible so you don’t knock out the air you have beaten in.

4. Stop folding when there are no streaks of flour visible in the mixture.
5. Spoon the mixture into the 2 tins so they are equally filled – you can do this by eye or by weighing the tins as you fill them.
6. Spread the mixture evenly in the tins, right to the edges.
7. Bake for 20 to 25 minutes or until a good golden brown and the sponges are springy when gently pressed with your fingertip. They should almost double in size during baking.
8. Remove the tins from the oven and leave for a minute – the sponges will contract slightly. Run a round-bladed knife around the inside of each tin to loosen the sponge, then turn out onto a wire rack and leave to cool.
9. Set one sponge upside down on a serving platter and spread over the jam. Gently set the other sponge, golden crust up, on top. Dust with sugar. Store in an airtight container and eat within 5 days.